We have our own paint mixing system and a PPG variant deck, but sometimes we still have problems with the colors not matching the variant deck chips.  What could be wrong?

First, remember that even though the chips in the variant color deck are actual paint and not ink, they have been sprayed exactly to spec.  The correct pressure, choice of reducer, amount of reducer, spray distance, speed of the pass, flash time - all those things that can change a metallic color come into play when your painter is spraying his sample to check it against the chip.  To expect that he/she has done it exactly the way it was done at PPG is expecting low odds, sort of like expecting paint to match panel to panel on the vehicle.  However, it should be in close enough tolerance to the chip that the blending process will hide any possible mismatch.  In the case of bumpers, if the chip matches well, the painter may have to make some gun or technique adjustments to get the paint to match the chip (consequently, the bumper too).

Second, poor mixing room maintenance can cause problems with your toners.  Every time you change the stir lid to a new can of color, that can must shake at least 5 minutes.  Then, before replacing the lid, place a paint stick in the can and “feel” the bottom with it.   It should slide around smoothly.  If it is rough and “catches” here and there, there is still pigment on the bottom and it needs to shake longer (scrape the pigment off the stir stick first).  Infrequent strirring can also cause problems.  Make sure they stir for 10 minutes, twice a day – usually in the morning and then just after returning from lunch.  It wouldn’t hurt to do a quick minute just prior to mixing a color either.  Also, every time you turn the machine on, make sure that all toners have engaged the drive gear or fork, if you have the old style.  If the machine is sluggish, a belt could be slipping, or a stir lid paddle could be broken inside a toner.

I had to tint a color to get it to match the car and it looked great in the sun, but when I pulled it into the booth, it looked terrible.  What did I do wrong?

Probably nothing.  The reverse can happen too where it matches in the booth but not outside.

It’s a phenomenon called “metamerism”, which is the reaction of color to various light sources: direct sunlight, flourescent lights, street lights, tungsten bulbs, etc.  Even sunrise or sunset light filtered through the horizon can produce a slightly different color than overhead.  It is more obvious with solid colors (especially in the red-orange-yellow families) than metallics, but it does exist with those too.

When PPG matches a color standard, the final formula will have been tested for quality with several light sources.  Even if we had the equipment, we are not chemists, so we wouldn’t know what to do with it.  It is caused by the fact that most colors are combinations of several pigments, which orient themselves in a certain position that we can’t see as the paint dries. When matching, most often different pigments are used because what was original is unknown.

All pigments reflect light differently, so sometimes you get a slight effect, other times it’s drastic.

Check out these two photos of an extreme example: 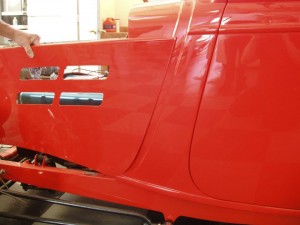 In the shop with only sunlight coming in through the windows.

Then, the same panel, same car, in the booth under flourescent light. Pretty incredible!!

How do you fix it?  Well, that car was so bad that they had to repaint the whole thing.  The insurance company, when shown the problem, agreed to pay extra to do that.  But most often you can get it to blendable by starting over with a different choice of toners.  When you discover the problem, keep your customer and the insurance company apprised of the problem in its early stages.  Try to get a blendable match in the two most common light sources – sunlight and flourescent (parked in the garage).  If you can achieve that, take the long blend route: 18″-24″ – and you should be covered.