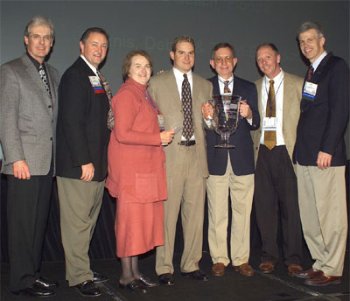 SCOTTSDALE, Arizona – February, 2003 — Ben’s Paint supply in Daytona Beach, Florida, has won the PPG Distributor of the Year award for 2002 at an awards banquet held in Scottsdale, Arizona in February.

Trent Emerson, president of Ben’s Paint Supply, accepted the award from Garry Goudy, vice president, PPG Automotive Refinish and Don Askew, director of distribution programs for PPG. The award is presented annually to the Platinum Distributor who has shown consistent sales increase and who has received high customer satisfaction index scores, which are conducted by an independent, third party consumer research agency.

“We are very excited about winning this award,” said Emerson. “I attribute our success to our excellent team that works with us, their focus on customer service, and the help of the PPG Platinum Distributor program.”

According to Don Askew, “The Platinum Program was created as a support mechanism and loyalty program for our single-line distributors with the ultimate goal of providing exceptional service and benefits for our refinish customers. We are very proud of Ben’s Paint Supply, President Trent Emerson, and his organization, as they have more than met the goals we set to select our Platinum Distributor of the Year. We’re very proud to have him in the program.”

“The Platinum Program has helped us in many ways,” said Emerson. “We used to carry five paint lines, but since we joined Platinum five years ago, we have been able to streamline our inventory and focus on one product line. Just carrying the name of ‘Platinum Distributor’, makes us more prestigious, and enhances our professionalism with the help of the marketing kit, the signage, and our stock program plus the terrific support of our partner, the PPG Platinum Network.”

Ben’s Paint Supply has been a family owned business for 40 years. Emerson’s grandfather opened the business in 1968. They have seven locations in the Central Florida area.

For more information about PPG programs, visit the PPG website.

Given to distributors who meet or exceed 20% in overall growth with PPG.

Granted to distributors that experience exceptional growth in the Delfleet and Delfleet Essential product lines.

Given to only 6 PPG Platinum distributors that year for achieving new account goals and beyond.