No, it’s not the Kentucky Derby or the Preakness, but in the world of Toyota it’s pretty darn close.  Toyota’s annual Triple Crown award goes to the top three collision centers in the nation, within their category.  For 2013, the top spot in the mid-size category goes to Gatorland Toyota Collision Center of Gainesville.  The award is based on several parameters, such as Sales, Training, Quality of Facility, Customer Service Index, Parts Sales, Parts to Labor Ratio, Tools & Equipment, and Benchmark Achievement.

Of course congratulations are in order for the performance of the entire 22-tech team at Gatorland, but the award would not have been as likely without the leadership of the very experienced collision center manager, Dennis Gair.  A graduate of the Michigan Careers Institute and Southeast Toyota Collision College, Dennis understands the quality, production and throughput factors that need to be addressed in today’s collision shops. 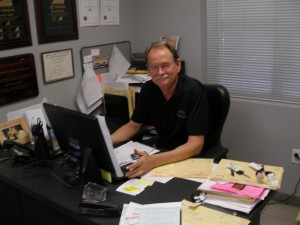 Dennis first became involved with things automotive as a Detroit auto mechanic.  He owned his own shop at one point and in 1981 became more involved with just shop management.  With regard to Toyota, he served as manager for David Maus Toyota in Sanford from 2000-2006 and then in the same capacity in Gainesville until the present at Gatorland Toyota.  He is a multiple award winner, not the least of which is the 2010 Toyota Best Idea Award that he received for the creation of his own blueprint repair planning system, called “3D estimating”.  In a nutshell, the estimate is not just a computer printout but it is tied to physically marking on the vehicle the areas that insurance adjusters need to see and the hours for each process.  It actually makes the adjuster’s life a little easier and keeps both the shop and insurance company on the same page, minimizing the need for supplements.

He also recently added the Fast-Trak management system software for increased production control.  At any point in time, he can check the progress of a repair, how many jobs each tech has, progress of payments on R.O.’s and much more, with just a few mouse clicks.  A key element in Gatorland’s production is not starting on the vehicle until all parts for the job have arrived.  This prevents tying up a stall when no repair activity can take place.

Speaking of cutting edge technology, Gatorland Collision uses the PPG Envirobase waterborne basecoat paint system in all their repairs.  Envirobase is not only “green” but it’s user-friendly and provides more consistent color match than solventborne basecoats.  Shops around the nation are quickly converting to waterborne today, with Envirobase being used in about 55% of them and the other 45%, well, everyone else combined.   Gatorland also uses Clip Lizard software, a PPG partner, to document billing of body clips, seam sealers and other incidentals that left unchecked can drain profit from a shop.

When a customer walks into the Collision Center office, Gatorland understands that they may have just experienced something traumatic and went the extra mile to create a warm inviting atmosphere.  There is plenty of space, comfortable chairs, a clean seating area and friendly service.  At this writing they are just installing the flat screen TV. 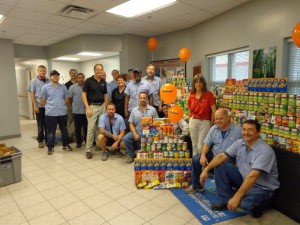 There is a side to Dennis, and therefore to his team, that sets business aside and gets involved in the community with some unique and creative ideas, such as the Christmas 2013 Feed the Hungry Food Drive and his Earn While You Learn Collision Apprentice Program. 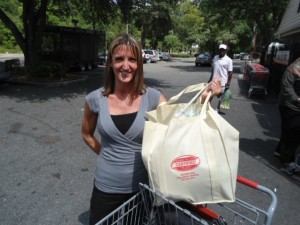 Most notable might be the grocery bag program employed at a local foodchain, Ward’s Supermarket.  Gatorland Toyota donated several cloth grocery bags to Ward’s and once a week Dennis would stop by to “catch” a customer using a Gatorland bag while shopping.  He would introduce himself, have a bit of fun with some questions and then he would buy whatever groceries were in that bag!!   Pretty cool that a shop not only fixes cars but tries to help out the drivers too!  Seems like there should be yet another award for humanitarian service too – how about it, Toyota?    Dennis would say that the reward is in the giving.

Enjoy the shop pictures and highlights of community events below: