In North Central Florida, when the topic of high quality custom and restored vehicles comes up in discussion, only a small handful of names are mentioned.   That conversation will not end without the name Chris Dobbs coming to the forefront. 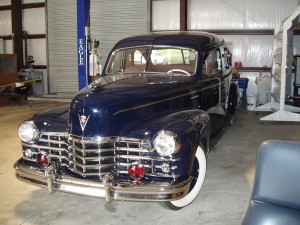 Chris is the owner of Huegenics (www.huegenics.com), located in Trenton, Florida.   He has built his reputation in the industry since he started in 1996 as Top Priority.  After a serious motorcycle accident in 2006, it was time for new beginnings and in 2007 he created Huegenics.   During his career, Chris has customized or restored 90-100 vehicles.  Maybe that doesn’t sound like a lot over 14 years, but when you consider the amount of time it takes to restore a worn-out vehicle or the design work involved in a custom creation, that’s actually pretty well humping it.  For a professional like Chris, an average restoration can take 4-6 months.  If you’re a beginning do-it-yourselfer, it can take 2-3 years!

Chris developed his interest in restoration at age 15.  His dad restored Mustangs and at one point decided to grant Chris his first car, a 1966 Mustang Coupe.   The experience taught him how to work for and complete a goal as he had to find and purchase all the parts himself.  So working odd jobs like a horse farm or in tobacco fields, he was able to get all the parts he needed, put it together, paint it in PPG Delstar acrylic enamel, and on the first day of his senior year in high school, he drove it to school.  As if that wasn’t enough, he finished has dad’s ’65 Coupe also!

Fun is fun, but after high school, it’s time to put some bread on the table.  Chris worked as a painter (and 3 months after, a foreman) for a chain of “quickie” paint shops.  He soon began to see that the type of work he was allowed to produce was not his style, so he left and worked for an independent shop as an apprentice and painter’s helper for 6-8 months.   Then he took a mechanic’s job for 2½ years.  He began to see that the skills he was developing were prime education for that which he loved to do – restoration and custom work.  So in 1996, it was time to give it a shot as a business.

Jim Schmidt, owner of National Parts Depot, collector and a huge fan of quality restoration, began to notice Chris’ work and in the late 1990’s, brought him a Pontiac Bonneville.  Chris says, “That was the day I knew I had become recognized”.  Anyone that knows Jim knows that meticulous is an under-statement.  When all was said and done, Chris still views that car as one of the nicest paint jobs he has ever done.  His reputation continues to grow as two of his restorations found their way to magazine covers, Mustang Monthly and High Performance Pontiac.   You can view some of his work in a special photo album we have created below.

Now, nearing the end of the first decade of the 21st century, Chris’ shop has expanded.  He has a full scale sheet metal shop and 4 regular employees.  He finds himself getting more and more into metal fabrication and even does some teaching of the craft.  On Jan. 19, he will be demonstrating the use of the English wheel to the local Ford V8 Club.  If you would like to arrange a visit to see that, just give him a call or e-mail (info on his website).

Chris buys solely from Ben’s and uses PPG exclusively, mostly Deltron basecoat and DCU2021 clear.  He states, “Here at Huegenics we demand only the best.   PPG and Ben’s Paint Supply provide just that.  The quality of PPG finishes has enabled us to provide long lasting show quality work for the past 15 years.  And with the caring and knowledgeable staff at Ben’s Paint Supply, we will be able to provide the same quality and excellence for years to come”.

Those of you that deal with us know that we are a full service supplier, but how many distributors provide spouses??  In 2007, Chris married Melissa Lesperance, a former delivery driver for Ben’s in Gainesville.  Top that, competition!!